Could the Chinese yuan/renminbi be gold-backed in the long term? What consequences would this have from the perspective of the People’s Republic of China and the rest of the world? And in the case of Bitcoin, could it actually even be a Trojan horse and a financial weapon of the Chinese to lead an attack on the U.S. dollar in order to come closer to a gold-backed currency at home? A thought experiment.

Interesting things are unfolding in the currency, commodity and precious metals markets. It may have been almost forgotten that the People’s Republic of China introduced a yuan-denominated and gold-backed oil trading contract almost three years ago.

These yuan/renminbi denominated contracts can therefore be converted into gold at any time. Since the launch of this contract, speculation has been rife in global commodity markets that the “petro-yuan” could eventually replace the “petro-US dollar” as the world’s leading commodity currency.

Global US dollar reserves at 25-year low
It was just three weeks ago that the International Monetary Fund announced that global U.S. dollar-denominated foreign reserves fell to a 59 percent share in the fourth quarter of 2020. This resulted in a 25-year low dating back to 1995. 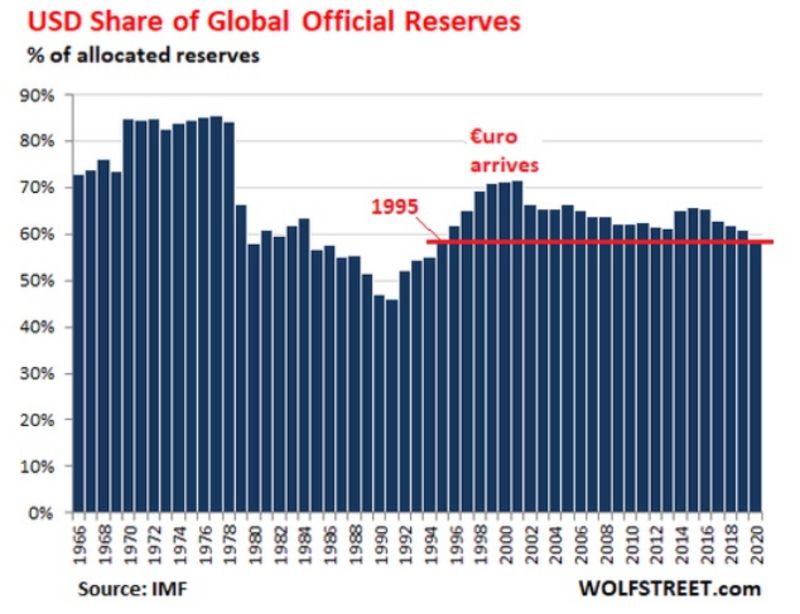 And with the People’s Republic of China also on track to become the first nation on earth to introduce a national digital currency (CBDC) in the foreseeable future, which will be an integral part of the domestic fiat currency system, the lead generated by the Beijing government over other nations in this area can be described as enormous.

People’s Bank of China Allows High Quota of Gold Imports
Then late last week came a report from the Reuters news agency that the People’s Republic of China had given the green light to both domestic and foreign commercial banks to legalize high levels of gold imports into the Chinese domestic market.

It is the People’s Bank of China (PBoC) that oversees in the People’s Republic of China the degree to which gold imports may be brought into the Middle Kingdom. Usually, individual commercial banks are subject to specific and pre-determined quotas.

Under normal circumstances, commercial banks are allowed to bring gold into the People’s Republic of China to meet domestic demand for the yellow metal. Every now and then, however, the PBoC intervenes to cap underlying capital flows.

As it now appears, the PBoC has given commercial banks permission over the past few weeks to move a high number of gold imports into their own country. The Reuters report refers to various sources, according to which the quotas allocated by the PBoC would be at the highest level since 2019.

There are said to be around 150 tons of gold with a current equivalent value of $8.5 billion currently earmarked for shipment to the People’s Republic of China. This message could have been among other things a trigger for the strong rise of the gold price in the past week, even if from a chart-technical point of view already some things had pointed to such a development.

Thus, the People’s Republic of China returns to the international gold markets as a buyer in a brilliant way, even though Chinese gold imports of an average of six hundred million U.S. dollars per month could already be observed since February last year.

In the whole of 2019, the gold imports of the People’s Republic of China amounted to an average equivalent of 3, 5 billion US dollars per month. Needless to say, this new report has fueled speculation in international financial and currency markets that the U.S. dollar’s status as a global reserve currency may be increasingly in jeopardy.

Gold backing of the yuan would put the U.S. dollar in serious trouble

There are even rumors in some places, such as here in an Asia Times report from last year, that the People’s Republic of China could announce a gold backing of the yuan/renminbi in the foreseeable future. Should such a development indeed occur – and the Russian Federation join in with regard to the ruble – it would certainly be anything but good news for holders of U.S. dollars.

We recall that the United States is well on its way to pumping some ten trillion U.S. dollars into the domestic economy through fiscal programs in a little more than a year’s time, even if this still requires passage of the Biden administration’s planned project to modernize U.S. infrastructure.

Ten trillion U.S. dollars! This amount corresponds to almost half of the American gross domestic product. Would America and Europe be in a position to match the Chinese should Beijing decide in favor of a gold link on the yuan/renminbi?

The answer is hardly likely. So it is easy to see that such a move would be accompanied by yet another intensification of geopolitical dangers and risks.

China could demonstrate its power, but it would also harm itself.
Last year, Alasdair Macleod looked at this issue to come to the conclusion that the People’s Republic of China could avoid a potential US dollar collapse by linking the yuan/renminbi to gold.

According to Macleod, if the People’s Republic of China were to monetize its extensive gold reserves, a fulminant crash of the U.S. dollar would likely occur on the same day. The Beijing government might well reserve such an option in light of the ongoing Sino-American trade, financial and technology war.

In the end, this would be a pure show of force. According to Macleod, however, there are good reasons for the Chinese not to take such a measure.

Beijing also draws on these reserves to counter-finance commodity shipments and to advance its New Silk Road infrastructure projects in third nations.

Willfully destroying the U.S. dollar would therefore in all likelihood also have serious repercussions for the People’s Republic of China itself – as well as for the rest of our world.

From a geopolitical perspective, it could almost be argued that the United States would have an advantage following a potential U.S. dollar collapse, as Beijing would not be able to adequately finance much of its global projects in that event, which would also minimize China’s political influence in its partner countries.

Nonetheless, the Beijing government will be aware of the problems facing the U.S. dollar, but without throwing a first stone into this pond to raise waves.

If inflation in the U.S. eventually gets out of hand, the PRC is likely to go after the Federal Reserve to publicly build pressure and urge Americans to move away from adherence to a policy of cheap money.

Macleod fears that by then it may be too late, as inflation is a phenomenon that cannot simply be put back into the bottle from which it escaped. In addition, there would be an unprecedented deflationary collapse in both the United States and the rest of the world.

There is no question, then, that embedded in the script of such a development would be an enormous banking crisis, which in turn would have far-reaching and unpredictable consequences for maintaining the stability of fiat currencies.

U.S. Dollar Collapse as a Precondition for the Gold Yuan
Despite a declining share of the U.S. dollar in global foreign reserves worldwide, international banks still primarily use the U.S. dollar to conduct business on a global scale.

It is clear that the outbreak of a new banking crisis would pose a massive threat to the status of the U.S. dollar as a global reserve currency, especially since credit debt is still far higher today than it was at the time of the financial crisis between 2007 and 2010.

Only then, if such an event were to occur, would the Beijing government have no choice but to sell off all its US dollar reserves in their entirety. Beijing would also have enough to do from that point on to defend the stability and preservation of its own currency.

Macleod is convinced that a development of this kind would only set the stage for a potential peg of the domestic currency to gold. Despite everything, the Chinese would probably see themselves forced to write off an immense amount of specially held U.S. dollars.

Bitcoin as a Trojan horse for the Chinese in their fight against dollar domination?
There would also be a financial vacuum from that point on, which the International Monetary Fund’s Special Drawing Rights could possibly step into.

Perhaps the looming launch of the digital yuan/renminbi could also prove to be exactly the control tool that the People’s Republic of China needs to master this looming transformation.

The announcement of a gold-backed yuan/renminbi would most likely be accompanied by an enormous increase in capital flows to the Middle Kingdom only a short time later.

For this reason alone, Beijing’s leadership seems to be serious about tightening the guidelines year by year with regard to a transformation from an export economy to a consumption economy.

Fiat currencies that are not backed by gold would probably start to plummet at the same time or would have to be adjusted accordingly. Whether the People’s Republic of China is really ready to avoid such cliffs is another matter.

In order to return to a gold standard, especially from the perspective of Western nations, there would be little choice but to massively curtail or even completely abandon the completely overflowing welfare state (see Greece during and after the euro crisis).

In this context, a recent statement by billionaire Peter Thiel, according to which Bitcoin could prove to be a financial weapon of the Chinese against the United States, proved to be interesting. The chart below shows that the U.S. dollar is still doing quite well against other fiat currencies, but its plunge is apparent in relation to Bitcoin (and gold and other commodities as well).

Is there perhaps some truth to the assumption that Bitcoin may prove to be a Trojan horse for the purpose of attacking the U.S. dollar, using this instrument as a sort of prelude to launching a gold-backed yuan/renminbi?

How else would it be explained that the People’s Republic of China all of a sudden and out of the blue calls Bitcoin an “investment alternative”, when in the same breath more and more nations, like recently Turkey, are preparing to ban Bitcoin trading and transactions based on it in their domestic climes?!